The Great Dane is a large German domestic dog known for its big size.[18][19]

As described by the American Kennel Club:

The Great Dane combines, in its regal appearance, strength, and elegance with great size and a powerful, well-formed, smoothly muscled body. It is one of the giant working breeds, but is unique in that its general conformation must be so well balanced that it never appears clumsy, and shall move with a long reach and powerful drive.[18] The Great Dane is a short-haired breed with a strong, galloping figure.[20]

In the ratio between length and height, the Great Dane should be square. The male dog should not be less than 30 in (76 cm) at the shoulders, a female 28 in (71 cm). Danes under minimum height are disqualified.[18] From year to year, the tallest living dog is typically a Great Dane. Previous record holders include Gibson, Titan, and George; however, the current record holder is a black Great Dane named Zeus that stood 111.8 cm (44.0 in) at the shoulder before his death in September 2014.[21] He was also the tallest dog on record (according to Guinness World Records),[21] beating the previous holder, the aforementioned George that stood 109.2 cm (43.0 in) at the shoulder.[22]

The minimum weight for a Great Dane over 18 months is 120 lb (54 kg) for males, 100 lb (45 kg) for females.[20][23] Unusually, the American Kennel Club dropped the minimum weight requirement from its standard.[24] The male should appear more massive throughout than the female, with a larger frame and heavier bone.[18]

Great Danes have naturally floppy, triangular ears. In the past, when Great Danes were commonly used to hunt boars, croppingof the ears was performed to make injuries to the dogs’ ears less likely during hunts. Now that Danes are primarily companion animals, cropping is sometimes still done for traditional and cosmetic reasons. In the 1930s when Great Danes had their ears cropped, after the surgery, two devices called Easter bonnets were fitted to their ears to make them stand up.[25] Today, the practice is common in the United States, but much less common in Europe. In some European countries such as the United Kingdom, Ireland, Denmark, and Germany, and parts of Australia and New Zealand, the practice is banned or controlled to only be performed by veterinary surgeons 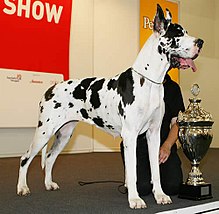 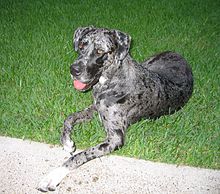 According to the breed-standard, Great Danes have five to six (depending on the standard) show-acceptable coat colours:[18][26]

The Great Dane’s large and imposing appearance belies its friendly nature. They are known for seeking physical affection with their owners, and the breed is often referred to as a “gentle giant”.[18][32]

Great Danes are generally well disposed toward other dogs, other noncanine pets, and familiar humans. They generally do not exhibit extreme aggressiveness or a high prey drive.[33] The Great Dane is a very gentle and loving animal and with the proper care and training is great around children, especially when being raised with them. However, if not properly socialized, a Great Dane may become fearful or aggressive towards new stimuli, such as strangers and new environments.[34]

Great Danes, like most giant dogs, have a faster metabolism. This results in more energy and food consumption per pound of dog than in small breeds. They have some health problems that are common to large breeds, including bloat (gastric dilatation volvulus).[35]

Nutrition plays a role in this breed’s health. Bloat, or gastric dilatation-volvulus (GDV), is the greatest killer of Great Danes.[35] To avoid bloat, a rest period of 40 minutes to one hour after meals is recommended before exercise.[36] Their average lifespan is 8 to 10 years; however, some Great Danes have been known to reach 12 years of age or more.[37][38] Like many larger breeds, Great Danes are at particular risk for hip dysplasia.

Dilated cardiomyopathy and many congenital heart diseases are also commonly found in the Great Dane, leading to its nickname: the heartbreak breed, in conjunction with its shorter lifespan. Great Danes also may carry the merle gene, which is part of the genetic makeup that creates the harlequin coloring.[39] The merle gene is an incomplete dominant, meaning only one copy of the gene is needed to show the merle coloring; two merle genes produce excessive white markings and many health issues such as deafness, blindness, or other debilitating ocular issues. Great Danes can also develop wobbler disease, a condition affecting the vertebral column. Since these dogs do grow at a rapid rate, the bones in their vertebrae can push up against the spinal cord and cause weakness in the legs. This can be treated with surgery or may heal itself over time.[40]